Like Mitt Romney, I still don’t know who let those dastardly dogs out, but I can turn all your other election questions into answers. Or at least answered questions, which is the next best thing.

What’s the worst (legal) thing Obama could do in these last few months of the campaign and still have a chance to win?

I’m torn between two things: one, if he was Tiger Woodsing out this whole time with a bunch of blonde bimbos, that would certainly hurt him with independent voters. Still, I’m going to say if he announces his conversion to Islam,  he would still have a shot at winning. It wouldn’t be a great one, but such a hilariously high percentage already thinks he’s a Muslim that it might not be so bad. That would be way more damaging politically than if he re-killed Vince Foster or something else that at least seems Tough on Terror.

I’m not sure Romney isn’t actively trying to answer this question. I mean, “accidentally reveal that he thinks half of Americans are worthless hoboes in front of a secret audience of rich people,” would seem to be about as far as he can go.

On the other hand, if the economy takes a severe downturn on Obama in the next few months, there’s basically no limitation to what Romney could say he intends to do as president. Mandatory Mormon Re-Education camps? Invasion of the UK? Marie Osmond named Poet Laureate? Re-writing Rocky IV so that Drago wins? It won’t matter, because voters will be all “I’m more focused on jobs,” and that’ll be that.

If Romney loses, he’ll just keep running for President for a few years (old habits die hard). After that, I hope he combines his greatest passions and organizes the Cayman Islands’ winning Olympic bid for 2032.

If it’s Obama, I hope he decides to pursue the Presidency of Kenya. Granted, it’s a step down and Kenya’s surprisingly lengthy Constitution forbids it for a number of reasons (I’m not sure if he “satisfies any educational, moral and ethical requirements prescribed by this Constitution or by an Act of Parliament”) but I’m sure they could amend that thing if Barack Obama became available.

What would it be like if politicians could run for office in any country?

In a word: awesome. I feel like some Republican should have proposed this by now: it’s an obvious free market solution to our woefully inadequate, bloated government–we should bring in foreigners if they can deliver better platitudes about American exceptionalism for half the price. But if America has a comparative advantage in producing tall white dudes with good hair, we should be able to export that.

And as the world’s superpower, America would have a chance to harvest the best talent of foreign countries and see if they can rise through our ranks, and also have the delightful possible side effect of seeing those who wash out of the extremely competitive American Politics League forced to earn a living in third world hellholes in order to show us they’re serious about trying to make it back to the big leagues. Are you telling me you wouldn’t be interested to learn five years from now that Rick Santorum was coasting to re-election in Zambia? This sounds like the greatest. Can’t the UN make this happen?

We’re getting off track here. Which loser’s concession speech would be better?

Oh, both would be great. I feel like Obama would just be disappointed in America in a way designed to make us all feel bad about ourselves. His words towards Romney will be gracious, but delivered with a knowing smirk that says very clearly to America, “Have fun with that.”

As for Romney, I’m pretty sure he’ll say something smug and derogatory about Obama (that’s not what always happens–remember how classy John McCain was? No? He was, though!) and then just generally tut about like the villain of a kids’ movie whose plan to build a mall on an important environmental site was foiled when some local teenagers put on a concert to Save Willow Park and outsmarted him. A foiled villain always wins.

What is the lowest conceivable percentage of the vote Romney or Obama could get in this election?

There was a guy in 1998 who murdered his opponent in a Tennessee State Senate race and he still managed to get over 1,500 votes. To be fair, he did promise to cut taxes, so, you know–good for business. But if say, Obama personally saved Romney and his family from a burning building, and then Romney somehow said something really tasteless (“It’s unbelievable that he would presume to do a better job than hardworking American firefighters” * smirks at having scored a point *), and then Obama died of smoke inhalation complications the next day, ObamaGhost-Biden ‘012 still probably wouldn’t get more that 59%.

Will Mitt Romney ever talk about Mormonism?

No. He wants to win. Bad question. But what he will do, if it comes to it, is have a sit down with a friendly reporter that will be billed as “Romney opens up on his religion” to a ton of pointless hype and then he’ll say a whole bunch of nothing things he’s probably already said, along the lines of “faith informs every decision I make.” On the plus side, there’s the off chance that Obama will make reference to it as frequently and un-subtly as John Edwards did to Dick Cheney’s gay daughter.

Obama. Besides that the polls are starting to show him as a heavy, heavy favorite, it’s really hard to convince people they voted for the wrong guy last time. Nobody wants to be like, “Oooh, I really screwed up in my choice of this guy for the most important job in the world.” They’ll let some stuff slide. Remember how W won re-election? He had a slapstick comedy made about him while he was still president! Of America!

And to go back to the election of 2004 for a second, the debate was basically Democrats saying, “This war is a disaster and you haven’t killed Bin Laden and–” and Republicans interrupting them with “9/11 Stay the course! 9/11 You don’t switch horses mid-stream 9/11!” And then they won. If Obama really wants to win, he should shoehorn that he killed Bin Laden into every other sentence.

Ok, so Obama’s going to win. What can I do with that information?

Bet on it. Because this is somehow legal.

Well, what would happen if one of the candidates got caught either throwing the election or “point shaving?”

First of all, that question is ridiculous. There’s no place that takes betting action on the point spread of the election (although, if someone finds one, please let me know!). So it would have to be one candidate throwing the election, which would be awesome for the following five reasons.

1) The other guy would win and then be in power and have no incentive to punish this guy who just gave him the presidency.

3) The disgraced candidate would tour the country signing autographs that say “I’m sorry I bet on the presidency” and earn way more money than he would have had he just won the election, thus, making fools of us all.

4) There would be a groundswell of support for a war with the country that hosted the servers for the site that ruined our election, but we’d probably decide against it.

Actually, maybe there is a downside to having one of our presidential candidates follow Pete Rose’s career trajectory as we descend into Mad Max-level anarchy. Let’s move on.

Why should I care about this election? What is good about it? 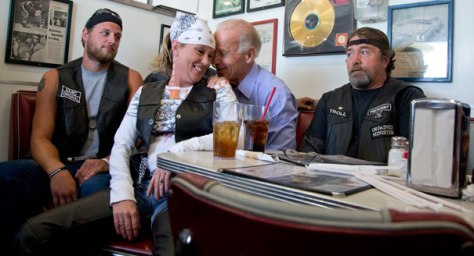 I assume you mean besides Joe “Three Letter Jobs” Biden. It’s funny that Paul Ryan has the reputation for being the compulsive liar of the Vice Presidential candidates when Joe Biden is the one who once stole some guy’s life and passed it off as his own. That wacky liberal media.

The great thing about politics nowadays is that there are plenty of prominent media figures who are so far in the pocket of one party or the other that literally nothing is indefensible. So no matter what shitty thing Romney or Obama does, people will not only say that it was good for the country, but that It’s Just Smart Politics. That insane Romney tape where he was all “47% of Americans are worthless hoboes” made some conservative commentators be like, “HE SHOULD’VE BEEN SAYING THIS ALL ALONG. I’m somewhat convinced if there was a secret tape of Obama telling a donor, “Now, normally I hate white people, but you’re one of the good ones,” that people would be like “If you look at what he said before that, he was making a more nuanced point about growing up biracial in America.”

Wait a second, that’s not a great thing, that sucks. Go ahead and vote early (or don’t) and then feel free to stop paying attention.