I feel like I wrote this post four months ago: San Francisco sports team enters sports championship against a hilariously blighted city. Nevertheless, the 49ers are in the Super Bowl, so we’re doing it again. A quick roundup of what these teams have going for/against them is in order. As is tradition in this sort of column, I will assign EDGEs to one team or the other based off of nothing.

In an extremely controversial decision, 49ers coach Jim Harbaugh replaced starter Alex Smith with Colin Kaepernick in the middle of the season despite Smith having a 6-2 record as a starter and having led the team to the NFC Championship last year. More importantly, Kaepernick accomplished both of my childhood dreams: playing quarterback for the 49ers in the Super Bowl and owning a goddamn turtle (requisite “I Like Turtles” link here). Here is a photo diary of Sammy the Turtle: 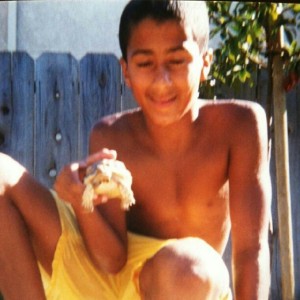 As you can see, Little Kap, Little Turtle. But turtles live to be old (see: this turtle that lived to be 188), and grow big. Let’s check back in a few years later.

That thing is enormous. How is he holding it up? I wish just one of the million media puff pieces on Kaepernick implied that he got strong by carrying his turtle around, thus sparking a series of turtle-based training regimens such as TurtleWeight, CrossTurtle, and TurtleFactorX. Say, are there any pictures of that turtle re-enacting a scene from Breaking Bad? Of course there are!

On the other hand, the Ravens are helmed by Joe Flacco. a suave Baltimore-area pizza salesman:

Why bother with the backup QBs? Let’s talk about Mr. Alex Smith. He seems like he’s having fun at the Super Bowl! 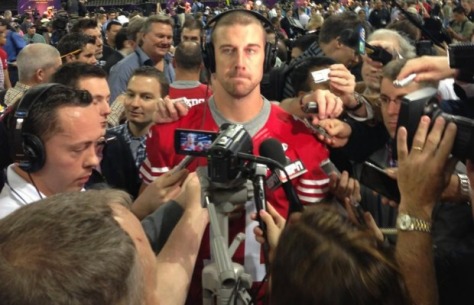 Woooooo! I don’t think there are any more unreasonable expectations than the ones put on him: he’s supposed to watch someone steal his job, do it better than him, and act like he’s happy about this development. As you can see, he’s not doing so great on the last point. Anyway, Alex Smith’s career is pretty much unparalleled. He went from being an enormous bust as a first overall pick to a starter that took a talented team to the NFC Championship to Sad Man in Headphones.

The Ravens’ backup is Tyrod Taylor, who is most notable for having a name and playing style that is similar to Voodoo Tatum.

It has to beat 49ers’ former disaster of a draft pick, Kwame “It’s One Syllable, Bitch” Harris being arrested at my favorite restaurant of all time, Menlo Park’s Su Hong for beating up his ex-boyfriend after an argument started when the ex-boyfriend put soy sauce on the rice and continued with an accusation of underwear theft. So, big thumbs down to Kwame on finding the worst and most ridiculous way to come out publicly. But on the other hand–putting soy sauce on rice totally ruins it–what you do is get an order of Szechuan Prawns and pour the sauce from that onto your rice–so he was in the right on that point.

The 49ers have Frank “The Inconvenient Truth” Gore. He evidently scored a 6 out of 50 on the Wonderlic intelligence test that they give to prospective NFL picks. That is not a good score, you guys. But the good news is that the Wonderlic is pretty much unrelated to footballin’.

The 49ers have Patrick Willis and NaVorro Bowman, who are pretty much unstoppable tackling machines as well as Sackmaster General Aldon Smith and his white brother, Justin Smith. Also, defensive tackle Isaac Sopoaga did 42 bench press reps of 225 pounds at the NFL Pre-Draft Combine in 2004. To put that in perspective, I don’t need to put that in perspective–it’s bench pressing 225 pounds 42 times; you should understand how difficult that is.

The Ravens have some dudes including longtime Tom Brady antagonist and cautionary tale about what happens when you don’t floss, Terrell Suggs. 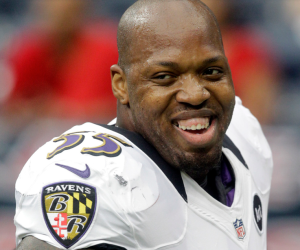 Good lord those gums are terrifying. If he were a movie, he’d be Gummo, written and directed by Harmony Korine. Speaking of which, Suggs apparently wrote this horrible-looking movie that features Jackée.

I guess we have to discuss Ray Lewis. I’m already sick of Ray Lewis, so we don’t have to talk about him any more, except to quote Ray’s entirely reasonable reaction to L’Affaire Bambi, a recent story that he was illegally using deer antler spray to enhance his performance:

I feel like it’s probably fair to say that fairly incontrovertible documentation about cheating is not a trick of the devil, but whatever, what do I know. Either way, he didn’t see nothin’ and he didn’t kill no motherfuckin’ lion.

I’ve heard a rumor that the coaches in this game are brothers. I’ll do some investigating, a little snooping around and see if I can confirm it.

We can all look forward to Chris Culliver’s apology for saying some homophobic things, but in lighter news, here’s Donte Whitner and Patrick Willis looking festive.

The Ravens on the other hand, have future Hall of Famer and grizzled old man Ed Reed, who shows his softer side here with a rendition of “Silent Night” as people shout at him.

Let’s just talk about Randy Moss, ok? He is important for a lot of reasons, some of which having to do with being, you know, awesome at football. I need another video of Randy Moss talking about getting fined in part because I love listening to his ridiculous hillbilly voice. Does anyone else in the world have that accent?

Also, never forget the time he got Joe Buck’s knickers in a twist. That’s worth something.

Weirdly, both teams rely on players from the University of Maryland–the Ravens with wide receiver and first pitch thrower out Torrey Smith and the 49ers with chocolate popcorn aficionado and interior decorator/tight end Vernon Davis.

Only one of these people has inspired the Onion headline “Ravens Coach Shows Movie About Michael Oher to Inspire Michael Oher” so, that’s a decided edge to the Ravens. I don’t really have much else in this category because offensive linemen are inherently and intentionally uninteresting. Sorry.

BREAKING NEWS: IT IS CONFIRMED THAT THE COACHES ARE BROTHERS. BACK TO REGULARLY SCHEDULED BLOG POST.

David Akers is going to make three 55+ yard field goals in this game, just ’cause.

One of these cities has a thriving tech industry that’s on the cutting edge of modern technology. The other one has a bunch of seaports and is full of people still living in The Wire times. While that might lead you to believe that Baltimore is the tougher of the two cities, the fact that it is named after Cecilius Calvert, 2nd Baron Baltimore makes it soft.

The 49ers are better at it.