I know, I know–two things most people hate: learning and movies with subtitles. For those of you with a Netflix account know that the streaming options run a little thin after a while. At a certain point, American Pie 6: Pie in the Sky (that one’s about them all becoming fighter Pie-lots) starts to look relatively good.

But good news, there’s a whole other genre you might not have considered (you racist): ForeignerStuff. And in that genre, plots take entirely different directions, characters act in weird, nonsensical ways, and sometimes a guy who looks like Pau Gasol throws himself in front of a moving train. It can be hard to follow sometimes because often they don’t follow the conventions of American movies, which often have things like “characters,” “characters with names” and “a plot.” But fortunately, I’m hear to provide what I’ve learned so that you can figure out what the fuck is going on if you ever decide to watch any of these things.

The lesson: Seoul is a gigantic, depressing hellhole

Holy shit, look at the size of this chunk of an apartment building. There’s a person in it, running. Can you see him? Of course not because it all is just this enormous building forever and everything looks the same. 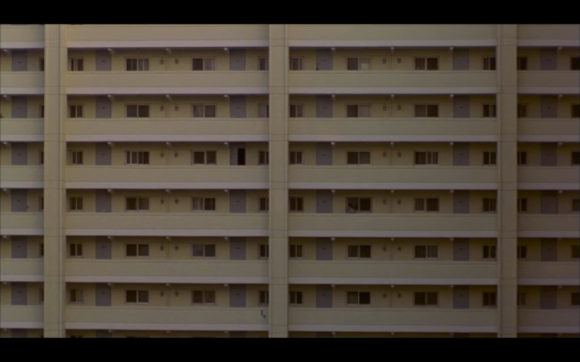 Fact: South Korea has some weird interpretation of Christianity that involves dressing up as Santa Claus

When our hero, the kind-hearted Geum-Ja is released from prison, she is greeted by a Christian group, including those people. Also, someone gives her some symbolic tofu, which reminds me…

Geum-Ja takes a look at that symbolic tofu and throws it to the ground because THIS MOVIE IS JUST GETTING STARTED, PEOPLE.

And you thought I was out of things to say about South Korea. The premise of this movie is that a horrible amphibious mutant sea monster is on the loose, but the REAL PROBLEM is that everyone who comes into direct contact with it is infected with a virus. 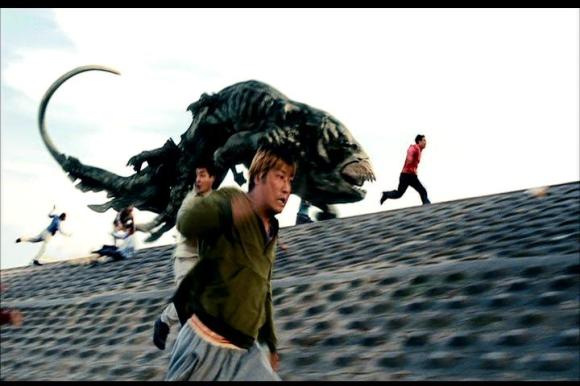 The horrible sea monster is running around and eating people, and yet, the guy who made this movie was like “You know what would freak people out? If that unstoppable sea creature that is grabbing and eating everyone also gave people a bad fever.”

Fact: Old Koreans go on bus tours together and GET WILD (or used to, anyway)

Here’s what IMDB so eloquently says:

Dancing in the aisles of tour buses was commonly seen on Korean tour buses up to a few years ago. Now. with stricter rules and sharper fines, it’s not as common anymore.

Fact: A male nurse is not inherently funny to French people

The only other movie I can think of with a male nurse is Meet The Parents, and ol’ Gaylord Focker is not the hero of an action movie. I’m stunned there hasn’t been a Kevin James/Rob Schneider movie about a male nurse yet. I feel like there’s some kind of mathematical proof demonstrating that, eventually the odds of one of them making a male nurse movie approaches 1. I think there might be something in Obamacare mandating it, even.

Michael Haneke made this movie twice–once in German in 1997 and again, in exactly the same way in English a decade later. Was he seeking some elusive perfection? Did he believe he could illuminate something new? Was he getting at some grander point about art, filmmaking, and how no two things are ever really the same? Nope. He just was unaware that Americans don’t go to the movies to read: “I just thought it was a shame that because it was in German it didn’t reach the audience that I had hoped for. And that’s why I remade it.” Cool?

Fact: Spanish people believe it is possible that Spain would be on the cutting edge of time travel technology

That’s cute, but you don’t invent a time machine by taking a four-hour siesta every day. Hilariously, this movie’s title does not rhyme in the original Spanish.

Fact: There’s no difference between “a hell/purgatory-style dystopia” and “Norway”

I watched this movie, mostly thinking that I was one step ahead of the twist, “The main character’s dead!” I thought, “This is all some alternate universe! I called it!” But that wasn’t really so much “a twist” as “the entire premise of the movie.” Unfortunately Norway (but really Hell) didn’t really strike me as that much different from what I expected from Norway (but really Norway) where their most beloved television program is about firewood.

Fact: Norway is cold, terrible, will kill you

There’s a part in this movie where a character falls in some water, and rather than try to climb out, is just like, “Eh, I’ve lived fifteen good years. I guess I’m dead now.” And then he dies. And somehow I was supposed to view that place as being considerably better than the the very clean and well-furnished “hell” of The Bothersome Man. You’re too frustrating sometimes, Norway.