The biggest controversy so far of the Hillary Clinton campaign has been the “Clinton Cash” scandal. Peter Schweitzer wrote a book with that same title (and this menacing cover), in which he pointed out the fact that the Clinton Global Initiative basically took whatever money it could get its hands on, often from people who were either evil foreign dictators or who stood to benefit from specific legislation. They also squeezed the money out of their friends! (Actually, I suppose the dictators also become your friends when you take their money).

So if we now know know where the Clinton Ca$h is coming from, the question is, where is it going? Fortunately I was able to get my hands on a pie chart that shows exactly where the Clinton Global Initiative’s money is being spent: 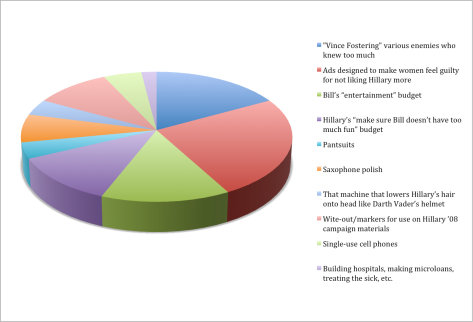 It seems like this controversy is mostly blown out of proportion, except for the pantsuits.  That is and always was a misuse of funding.