While it can take years and years to make a movie, it only takes like two hours to watch one, so I saw a whole bunch this year. While I didn’t love all of them, I bet some of you will!

You should see this movie if you…

Fantasize about having a different biological dad.

Want to believe those ragtag, troubled youths are going to make it after all.

Want to believe those ragtag, troubled French youths are going to make it after all.

Believe Greta Gerwig may be adorable and want to spend two hours testing whether or not that really is the case.

Believe Dame Judi Dench may be adorable and want to spend two hours testing whether or not that really is the case.

Want to see the movie with the most “holy shit” moments per minute. In case you’re not familiar, this movie is a documentary in which actual killers re-enacting their killings in the style of various film genres.

Want to see something super morally reprehensible. Every year I end up talking myself into watching a Lars von Trier movie, and every year I end up angry at having spent a long-ass time only to end up quaking with rage at the horrible implications of the events that transpire. In the case of Breaking The Waves, the moral of the story is ostensibly that you should follow your own path toward faith rather than that of a dogmatic church, but what this works out to in practice is that you should always do exactly as your husband tells you, even if it literally means going onto a pirate ship with the explicit intention of being raped to death.

Want to see something marginally less morally reprehensible than Breaking The Waves. For having produced Borgen, AKA the Greatest TV Show Evar, Denmark sure has come up with some objectionable-ass movies. This one’s basically about how children are always going around accusing adults of raping them and we shouldn’t believe them.

Believe a boring couples vacation can be livened up with a bunch of random, gratuitous murders.

Saw the first Hunger Games and thought, “You know what would make the sequel perfect? If nothing whatsoever was different!”

Hate movies with accurate titles. All they do is float! Honestly, the only way this could be topped is if 12 Years a Slave were called Unionized Workspace.

Want to believe that the most popular TV show in Winnipeg is one in which an oversensitive man takes offense at something and then needs to be talked out of suicide. I mean, it might be true.

Want to see Brad Pitt play cast himself in the most self-indulgent role in film history. 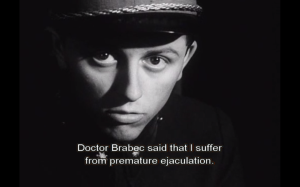